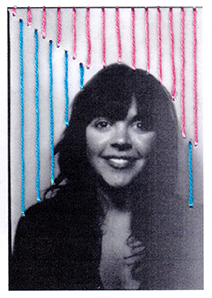 Rossanne was a student of International Studies and Foreign Languages, and later studied Photography at the University of Arts South Australia. It was during this time as a photography student, that Rossanne was awarded a grant from the South Australian Youth Arts Board to produce her first solo show 'Looking Through Fresh Eyes' (2003) which explored the Adelaide community through black and white photography. Since her first exhibition, Rossanne has regularly exhibited her work in Australia, the UK and Europe, and has also been awarded arts grants and places in mentorship schemes to further develop her art practice exploring memory, place and identity.

Rossanne’s distinctive documentary-style photography and her ability to employ various techniques such as embroidery on photography, photo transfer and Polaroid manipulation have resulted in a diverse body of work; from black and white photojournalism to expressive imagery that blurs the border between photography and the handcrafted. Embedded within her work is a continued exploration into nostalgia, memory and identity.

In her 2018 body of work, ‘Strange New World’ Rossanne explores false memory recall through embroidery on photographs. Embroidering abstract shapes, pattern and colour onto old photographs, Rossanne highlights the ever-changing nature of our memories, influenced by factors such as age, culture, time and imagination. The result is imagery made surreal, with reinvented histories. ‘Strange New World’ was on show at Brunswick Street Gallery (Melbourne, Australia) in April 2018. A selection of imagery from her ‘Strange New World’ exhibition can be found here.

Rossanne's Strange New World image was part of the Royal Academy of Arts Summer Exhibition 2018 and several of her embroidered pieces were on show at Tate Modern in 2019.

Rossanne continues to investigate memory and identity using embroidery on found images and on her own photography. Examples of her recent work can be found in the New Works section and on Rossanne's Instagram, @rossannepellegrino.

People and Place, The Observer Building, Hastings. As part of Coastal Currents.

Guest Speaker at the University of South Australia discussing ‘How to organise a Photographic Exhibition’.

2003
Assisting in the production of photographic work for Snapshots Of A New Life, exhibited at the State Theatre (Adelaide) for the Migrants Resources Centre of South Australia.